The Cost of a Turkey

The Cost of a Turkey

Before COVID-19, the size of turkeys had never been an issue worthy of national attention. But like everything else in 2020, this year it’s different. In October, many national media outlets reported that turkey farmers and grocers are concerned their turkeys won’t meet consumer demands. This year, there will be fewer large Thanksgiving gatherings, with most people celebrating in smaller groups. Smaller groups mean demand for cheaper, smaller turkeys. This year, the turkeys hitting deli aisles will be too big. 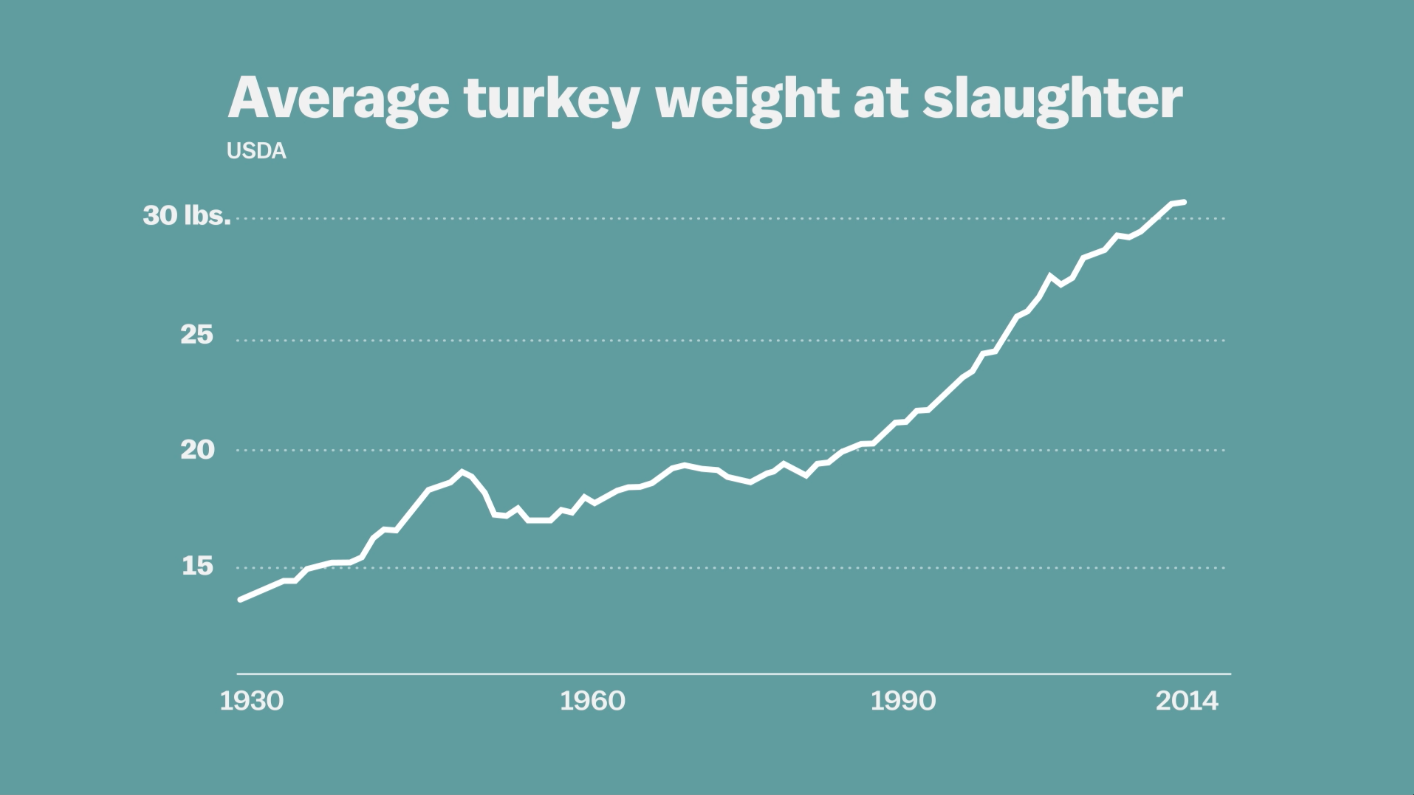 Few realize that the turkeys on their table have been growing for decades. To fatten profits, the animal agriculture industry has selectively bred turkeys to grow to more than double their original, evolutionarily honed size. Prior to this genetic manipulation, turkeys weighed around 13 pounds at slaughter. Now, the average turkey at slaughter weighs 30 pounds. What’s more, turkey producers have accelerated their growth. Turkeys reach this monstrous weight at only five months, as juveniles. To put this into perspective, picture a 13-year-old human weighing 200 pounds.

Turkeys suffer constant physical pain for these five months. They grow so fast that their skeletons cannot support their weight. As a result, many turkeys cannot stand upright. While wild turkeys can fly as fast as 55 miles per hour and run at up to 25 miles per hour, turkeys bred for slaughter often can hardly move. Male turkeys get so big—as heavy as 50 pounds—that they physically can no longer reproduce naturally as they would actually crush the female upon mounting. Today, reproduction happens almost exclusively through artificial insemination.

Like all animals, turkeys have sentience and personality. When not forced to live on filthy factory farms, turkeys spend their days caring for their young, building nests, foraging for food, taking dust baths, preening themselves, and roosting high in trees. People who care for turkeys at sanctuaries call them “natural detectives.” They are naturally curious, always checking out new sights and smells, and enjoy greeting visitors. They can live to be 10 years old.

There are about 7 million wild turkeys left in the United States. By contrast, some 245 million domesticated turkeys are slaughtered every year in this country. About 45 million of those turkeys are killed for one day in November.

This Thanksgiving, you probably won’t be seeing that relative who always asks if you’ve given up your vegan/vegetarian diet yet or if you’re sure you’re getting all of your nutrients, but hopefully you can celebrate with them over zoom or google hangouts, or facetime. If you do, you have an opportunity to educate them that the cost of putting the turkey on the table is more than just dollars and cents. It’s the perversion of an entire species to make a buck.

Previous Story
Speak Up for Orca and Black Bears In Washington!
Next Story
Become a NARN Member Today To Enter the Raffle And Make a Huge Difference For Animals in 2021!

[vc_row][vc_column][vc_column_text] NARN is growing! We are undertaking some exciting changes,...

NARN Board Statement on Overturning of Roe vs. Wade